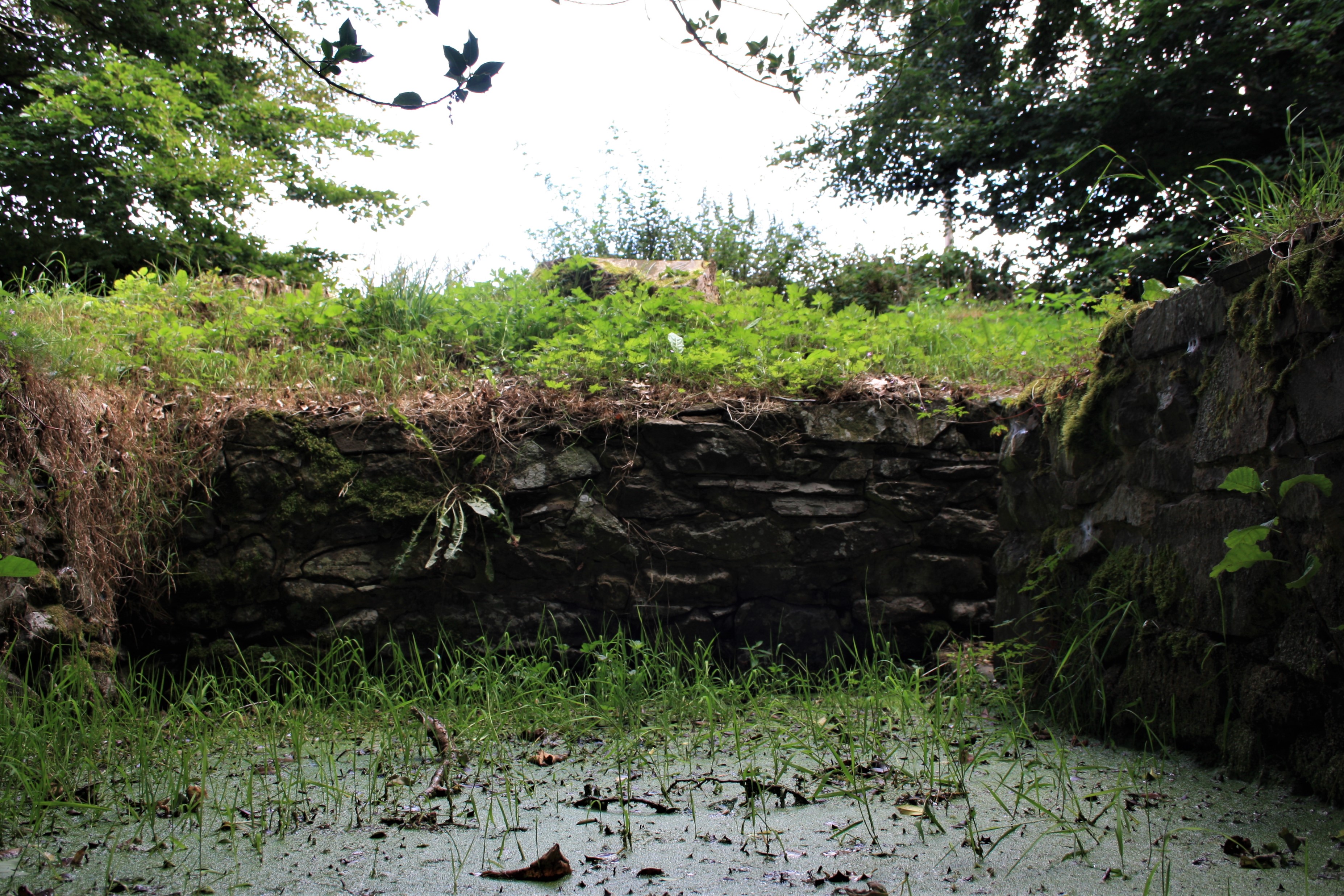 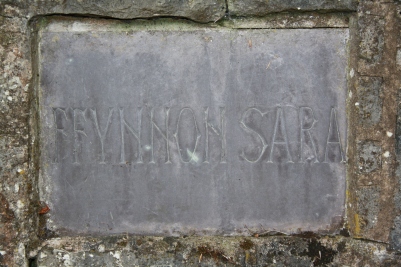 Ffynnon Sara (Sarah’s Well) is in the parish Derwen, Denbighshire, to the west of the church and beside a minor road that leads from Clawddnewydd to Bettws Gwerfil Goch. It would appear that this narrow lane was, in the past, much more of a major route. It has been suggested that the route was once a section of the Pilgrim’s Track which linked St Winefride’s shrine at Holywell with St Davids which was one of the most important pilgrim routes across Wales in the medieval period, and was identified as such on route maps at least until the seventeenth century. Clearly the area has been somewhat more of a focus for the area in the past than it is now. It is believed that at one time a church or chapel, the Upper Derwen chapel, stood close to the spot. Remains of the church were still to be seen at the start of the 19th century, but the precise location, said to be near Cefn Fynydd is not known. Roof beams, now removed, that were once part of the nearby farm house at Pyllau Perl (now Glan y Aber) were said to have been taken from the church.

Closer to the well it is suggested that an Inn, the Sun, stood into the 18th century, again implying the importance of the route and the location.  It is probable that the two cottages that stood on the roadside beside the well through the 19th century were actually the remains of the Sun, although a farm also close to the well appears to have recently been renamed as Sun Farm maybe in reference to the former inn. With much more local activity we must assume that the well was an established feature of the local landscape in the 18th century..

It has at times been assumed that Sara is a derivation of St Saeran who founded a monastery at Llanynys in the 6th century some eight miles  from this well, This is, however, a relatively recent assumption and there is no particular reason why he should have become associated with the well. In the 17th century the well was recorded as Ffynnon Pyllau Perl (Pearl Ponds)  linking it  to the above mentioned nearby farm with the same name. It is commonly assumed that the present name, Ffynnon Sara (or Sarah), is derived from that of  a woman who lived in a cottage beside the well  and tended it.

In the nineteenth century the well stood in the garden of two cottages, of which the occupant of one acted as well keeper. She would keep it clean and bathers would give her a penny or two in return. By 1811, the name of Sara was firmly  attached to the well, so any synonymously named well keeper must predate this time, Nicholas Carlisle in his Topographical Dictionary of Wales noted that

The parish abounds with springs of excellent water; one of which, called Ffynnon Sarah or Sarah’s Well is in great repute for its efficacy in the cure of cancers. These dreadful diseases, Stones and Gravel, are totally unknown to those inhabitants who are natives; and some who have removed hither from other situations, have been completely cured 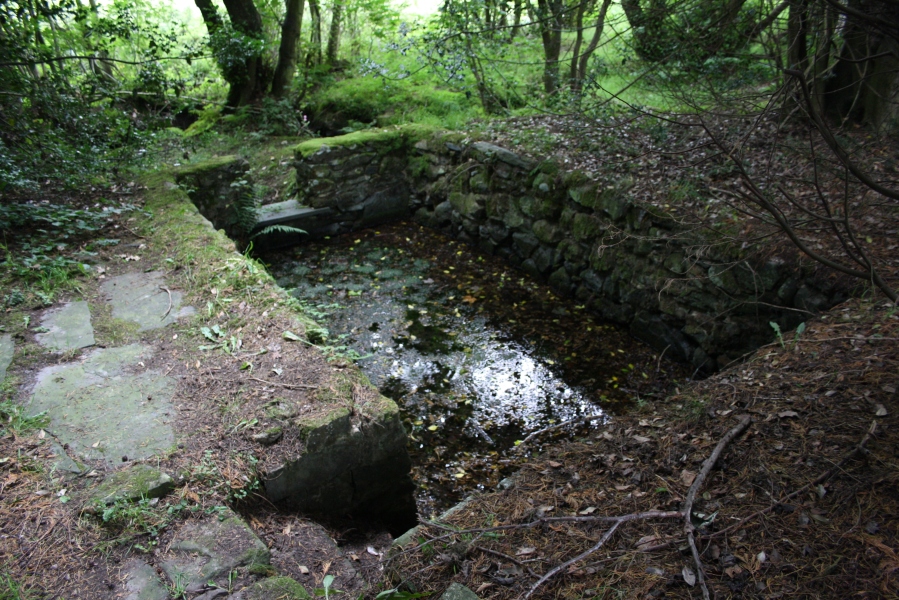 Use of the well seemed to remain high in the first part of the 19th century but declined rapidly later in the century. An article appeared in Y Brython in 1861 written by Edward Charles. He had used the well in the past noting that

It was published and believed that the water of the well possessed special virtues, and that it cured many fevers and this I know, and saw myself, many people came from distant parts to bathe in it. I had bathed in the well myself years ago, but not to be cured of a fever but to cool myself in hot weather. It was customary for every one about to bathe to offer a pin to a little well close to the one they were going to use; but I never heard what this signified.

By 1861, according to Charles’s report the well was becoming neglected and unused. Rev Elias Owen provides a description of the well in 1883.

The bath is in a fair state of preservation, but overgrown with weeds and wholly uncared for… I may state that cresses grow in the well and several trees of modern growth are allowed to thrive around it. The whole place presents a sadly neglected condition but 80 years ago it was a place of fame.

By 1883 both the roadside cottages were in ruins, however, Owen spoke to a woman, Susan Williams, who had grown up living at one of them having been born sometime in the first decade of the 19th century. She reported that her mother had been the well keeper for a time. The name Williams appears as a resident of one of the cottages on the 1840s tithe map. 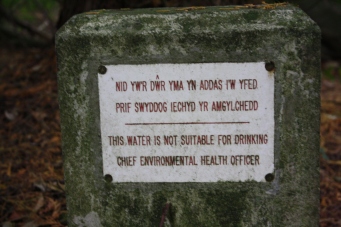 She remembered there having been a low circular building, something like a summer house, close to the steps into the well, on the ceiling of which were suspended hooks for bathers to hang their clothing. She too remembered the pin well beside the basing described by Edward Charles. She remembered it as having been divided into two by a stone partition. Into one of these sections pins were dropped and handfuls of pins could be seen in the base of this small well. Those seeking a cure for warts would prick the wart with a pin then deposit the pin in the well.

The Report of the Royal Commission Inspector from 1908 implies that the site of the local cottage was still visible, though this is not now the case. Neither is there any sign of the pin well.

From Owen’s conversation with Susan Williams he notes that she told him that the well was considered to be under the care of the then rector, Rev R Jones who died in 1819 and from this implies that the well might be considered as a church well. This link between church and well was revised in the 1970s when the well and surrounding area was repaired and landscaped by the then vicar of Derwen Rev J P Cooke, who also undertook substantial works in the churchyard. It may be that the pin well and any remains of buildings around the well were obliterated. 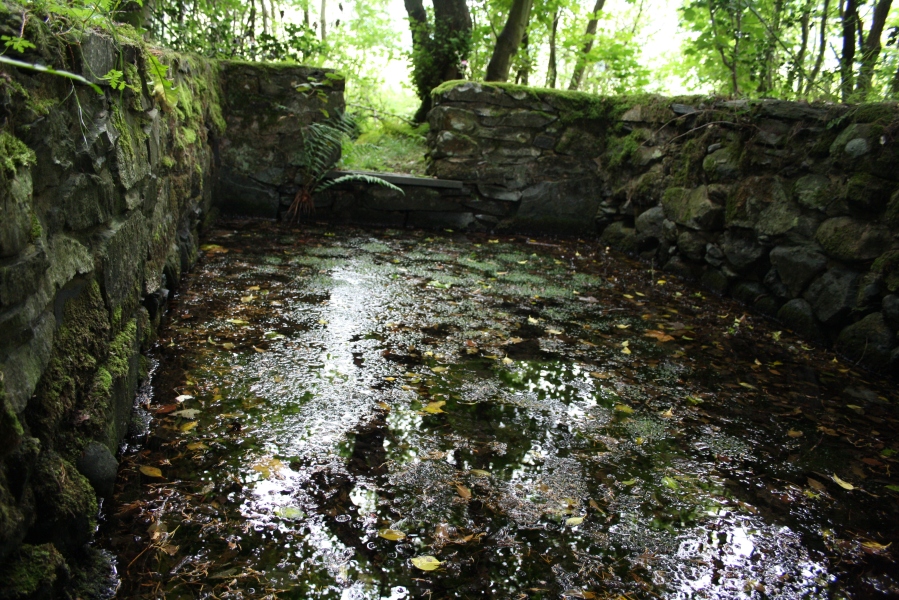 Following this work the well now stands in its own grounds, accessed by a cobbled path from a gate at the roadside. The well as it stands today is a stone lined basin with stone floor. Three steps lead down into the water. It measures about 10feet by 6feet. At the times I have been there the water has been about 6 inches deep. Water flows out of the basin down into a stream that flows past the site.

A final legend of the well concerns a young woman whose hands were badly affected by eczema. She was about to get married and, worried she wouldn’t be able to wear her wedding ring,  she was advised to wash her hands in the well’s water. The story has it she was completely cured in time for her wedding.

To find the well from Ruthin,  take the B5105 towards Cerrigydrudion. At Clawdd Newydd turn left onto a minor road signposted Melin-y-Wig. This is the Pilgrim Track. After the first left turn signed to Derwen continue about half a mile. The well is on the right. 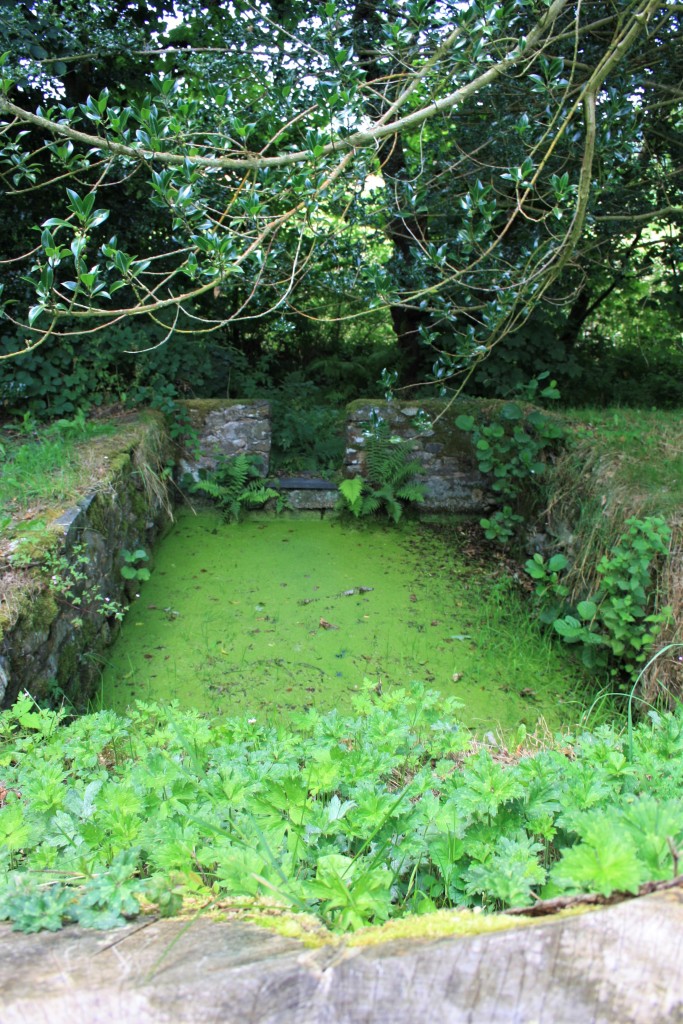