St Mary’s Well / St Melyd’s Well, I was tempted to say “so good they named it twice”, but I think that’s probably pushing things a little to far. It took three visits to finally pin it down, and even when I did it didn’t turn out to be all that exciting.

St Mary’s Well  lies on the boundary between Meliden (Gallt Melyd)  and Gwaenysgor. The church at Meliden is dedicated to St Melyd and that at Gwaenysgor to St Mary Magdalene. The well has carried both the names of St Mary and St Melyd, though as we have found before St Mary’s Well, Ffynnon Fairm often appears to be a generic name for Holy Wells, and the St Melyd dedication probably predates that to St Mary.

“now no more than a hollow, about 4 feet long and two feet high, the bottom formed of water worn stones; but it was stated that the well sometimes contained water.”

With no more recent description than that, we had little to go on in our search for St Mary’s Well. Using the grid reference supplied by the Coflein database, although lacking a GPS to check the precise location on the ground;  and the fact that the large scale OS maps mark a well in approximately that location, we ventured out.

The well is hidden  in Coed yr Esgob (The Bishops Wood), which occupies a steep hillside overlooking Prestatyn. The location marked on the OS Maps is best  accessed from the end of Bishopswood Road, it lies in an area which contains the remains of eighteenth century lead mine workings, one of which is well preserved and may be visited.

The first attempts turned into a wild goose chase involving precarious scrambling about on the sides of s steep hillside risking life and very probably limb. Given that no recent descriptions were available any slightly hollow feature became a candidate.

In response to my original post on the topic, Janet Bord and Tristan Gray Hulse did a little exploring and passed on information from a local resident, which finally led us to the correct location. Even this bears little resemblance to the description of the Royal Commission, and it took two visits to be convinced.

A short, but steeply climbing path, leads directly from the roadside, accessed by a few steps. It is beside a large, forbidding looking house, which appears to be gradually spreading up the hillside with stone and concrete. The name of the house? St Mary’s – now that should have been a give away.

The well site is at the top of the track, at the foot of a small rocky outcrop, in a sheltered hollow in the hillside.  It is well hidden behind fallen branches and trees. No signs of water there on any visit I have made, and no evidence to support the Royal Commission conjecture that it sometimes does. Although the inside of the well seems clear of debris as though it is possible washed clear at times. 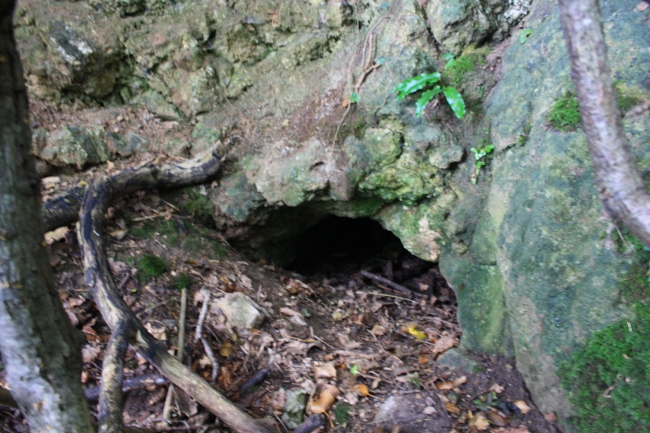 St Melyd is believed to be a corruption of the name of Mellitus, an abbot from Rome who was sent to England in the early seventh century to assist St Augustine with his mission. He was the first Bishop of London, consecrated such by Augustine in 604. St Melyd’s day is celebrated on May 9

The church of  St Melyd is down the road towards Dyserth in Meliden itself. The church was firmly locked and there were no signs of how to gain admittance. A large sign dominated the lych gate proclaimed Regulation 17 – detailing what could and couldn’t be placed at gravesides. The fact that this was regulation 17 prompted the question of how many more regulations there were.

The church of St Mary Magdalene, on the other side of the hill at Gwaenysgor, is a smaller and much older building. This too was locked on the day we visited.

Please note that since this post was written I have been informed that both churches will normally be open to visitors during the day.

This item was substantially re-written in March 2014.