St Peris’s Well
Nant Peris lies in the Llanberis Pass on the slopes of Snowdon. This is the original settlement of St Peris, before the lure of slate mining drew the population down the hill to the village of Llanberis on the shore of Llyn Padarn.

St Peris remains an enigma. Legend has it that he was a Cardinal in Rome, but his name is as little known there as it is in Wales. Baring-Gould and Fisher, struggling to find a genealogy for him suggest that he may have been one of the sons of Hedig ab Glannog who, having lost their lands by the Lavan Sands to flood took up sainthood as an alternative career, first at Bangor on Dee and later at Bardsey Island. This would make him a brother of Celynin whose church and well are found further east at Llangelynin. Peris’s name is remembered only in this area, where the church at Nant Peris and another at Llangian is named after him.

His well is a couple of hundred yards to the north east of the church, lying at the base of a small rocky outcrop in the garden of Tynyffynnon, the house that was the traditional home of the well guardian.

It remains well kept, the present construction dating probably from the seventeenth century. A small stone lined basin, about four feet square, with stone benches all around it, and a dry stone wall surrounding, built up to ground level behind the well. On the back wall three niches are formed within the stone work to hold offerings. 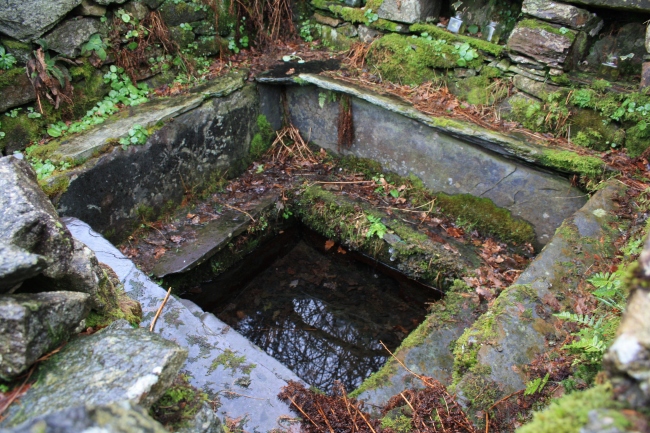 Water flows out under the wall towards the south of the well, forming a small stream across the garden, large stones are tumbled over the point where the water flows out, possibly evidence of former building, although it is said that the well itself was never roofed. 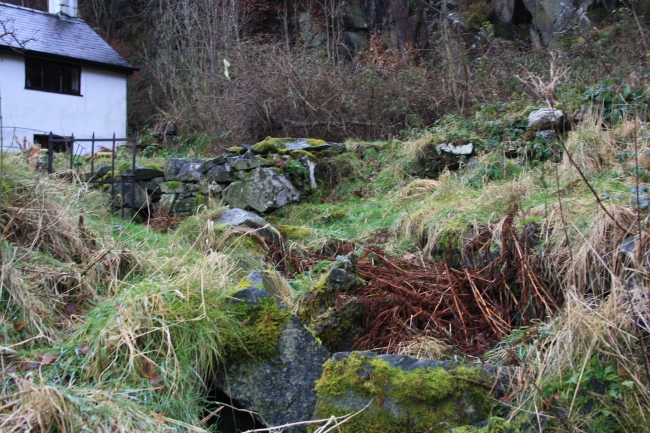 The well was traditionally resorted to for healing and was said to be effective for rickety children and scrofulous and rheumatic people who drank the water or bathed in the well. Two fish were kept in the well. If they emerged during bathing then the cure would be successful, if they remained hidden in the stone work then the visit would be in vain. Needless to say, those seeking a cure learned to try to tempt the fish out with pieces of bread sprinkled on the water before bathing.

The well was clearly popular and widely resorted to before the mid eighteenth century. Offerings from visitors were placed in a box inside the church, and at the end of each year the amount collected was sufficient to pay the Parish Clerk’s salary. However, towards the end of the eighteenth century its use for healing had significantly declined although the traditions of the well were remembered in a more adulterated fashion. In 1778 Pennant wrote on his visit to Nant Peris

“Here is to be seen the well of the saint, inclosed with a wall. The Sybil of the place attends, and divines your fortune by the appearance or non-appearance of a little fish, which lurks in some of its holes” [1]

“A poor woman who lives in a cottage near the spring has a few pence given to her by strangers for showing one or two large trout which she feeds in the well.” [2]

A terrier of 1814 also notes the decline

There is also an alms box in the church, the key of which is kept by the wardens and into which the 6d and 4d pieces were formerly put very frequently by persons who either bathed their children or came themselves for the purpose in St Peris’s Well. These small offerings to the Saint amounted at the end of the year to a considerable sum, but at present they are very trifling.” [3]

The tradition of the fish was, however, maintained into the twentieth century. The practice was that two fish should be maintained in the well, a tradition said to date back to the time of Peris himself. When one fish died, the remaining fish lived alone in the well until it in turn died, whereupon two new fish were introduced.

“The last of the two fish put into the well about fifty years previously died in August 1896. It had been blind for some time. It measured 17 inches and was buried in the garden adjoining the well.” [4]

The addition of the new fish in November 1896, was reported widely in the press. It was recorded by Y Genedl Gymreig (17 Nov 1896) and Baner ac Amserau Cymru (21 Nov 1896), as well as in several English language publications. The well was identified ass Ffynnon-y-Sant in these reports  The fish were passionately guarded by the villagers, when once a fish was stolen from the well the perpetrator was hounded and forced to return it.

I don’t believe that there are any fish there today. I haven’t seen any reference made to them and certainly, perhaps unluckily, none were seen during our visit, although I have heard that there is a plan to reintroduce them at some stage.

We were unable to visit the church, it was locked and there was no information on where to find a key. The only signs of life being the sheep retained to keep the church yard neat and tidy.

We would like to thank the present occupant of Tynyfynnon, no longer a Sybil collecting pieces of silver, who gave us permission to visit the well.