There are days when you begin to  imagine that St Beuno was in the franchise business. His wells seem to have branches everywhere, from Gwyddelwern to Clynnog, from Bala to Aberffraw, he almost had the North Walian market sewn up back in the day. Interestingly, although he is now remembered by so many solely for his role in  the story of  Winefride (more accurately Gwenfrewi in Welsh), Baring Gould and Fisher in their Lives of the British Saints suggest that traces of the presence of Beuno himself in Flintshire are much slighter than elsewhere.

His well at Holywell has, in recent years, been overshadowed by its more famous neighbour that of St Winefride. When I first tried to track it down I soon found myself waist deep in nettles and brambles and was forced to retreat in failure. Now, however, Beuno’s well seems to be making a comeback, making a bid to regain its place on the tourist trail and on the pilgrim trail. It is set to become a landmark on a new St Beuno’s Heritage Trail linking Holywell and Basingwerk. A new path has been constructed. It begins with a few steps leading out of the corner of the St Winefrides’s Well car park, follows a short woodland path and then leads up a vertiginous, exhausting flight of 75 steps climbing the hill. This is where, they say, Beuno’s chapel stood, where, they say, Winefride fled when pursued by Caradog, and from this spot here then severed head bounced and rolled until it came to rest at the point from which her well still issues forth.

Over the last hundred years, Beuno’s well has received rather disparaging comments. The Royal Commission in 1910 reported

A pool of water which at present can hardly be considered a well. It is situated beneath a tree in a meadow below Pen Dre House west of castle Hill. The pool is of irregular shape, and a bank projects into it. Two of its sides are about 8 and 5 yards respectively. It has recently been cleaned out. There is a slight spring

A pool of water, rather muddy, 2m by 3m, partially enclosed by a stone wall, with a slight spring evident. 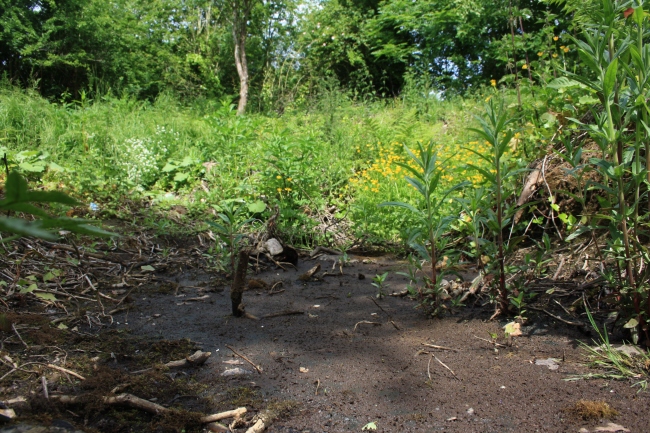 The site now resembles a small crater, CPAT suggest it looks more like a mine shaft than a well. The hollow on the hill top is some 10 by 15 yards, with steep sides and at its maximum depth the bottom is some six or seven feet below the surface level.

When I first saw it last autumn – see below – it was completely enveloped in trees. Hawthorn trees grew all around the well and up the slopes of the edge of the pit, and larger tress grew in the bottom of the well.

These have now largely been removed so that the outline can be seen more clearly. Although nature has replaced them with tall grasses, flowers and weeds, so that the shape of the bottom of the bit still cannot be seen clearly.

A 1:500 scale map from the 1870s shows the feature as with a very distinctive shape. A spring appears to rise towards the north, which flows in a short dog-legged stream to a pool some feet away. It is, with faith, possible to trace this pattern. There appears to be evidence that the water rises at the very northern end of the pit and flows down through it. It forms a small muddy pool towards the centre of the pit, with evidence of the remainder of the pit southwards being considerably waterlogged. It maybe that the cleaning out reported in 1910 may have changed the shape of, or even eradicated, the dog-legged stream; however evidence of a slight spring and water remain.

A number of accounts make reference to a tree above the well. It was, apparently a custom for pilgrims to hammer coins into the tree by way of an offering. It seems that this practice led eventually to the death of the tree and I believe it was finally removed by the council at some point in the 1950s. Baring Gould and Fisher record that “All trees growing on land belonging to Beuno were deemed sacred and no one dared to cut any of them down lest the Saint should kill them or do them some grevous harm”. I’m not sure whether those responsible for removing the trees here have felt the effect of this.

There is no obvious evidence of the stone wall mentioned in the HER file, although recent excavations, carried out in connection with the restoration report having found evidence of a stone pathway, dated to the eighteenth century, around the top of the well at some points.

The recovery of St Beuno’s well is clearly a work in progress, and may well repay further visits. If and when any changes occur I shall update this report.