When a whole community, however small, is named after a well, then it is a great shame that the well can be allowed to be lost so easily. It does feel a little like biting the hand that feeds you.

Admittedly the community around Whitewell is relatively sparse, It lies very close to the English border, south east of Wrexham and a couple of miles to the east of Whitchurch in Shropshire.

CPAT notes that there is no historic core to Whitewell nor any convincing evidence that it was ever a nucleated settlement [1]; and to be fair the well as never going to be a major tourist attraction.

“covered with a locked iron plate, beneath the supporting stone work a copious flow of water still issues.”

There is no information immediately available to support its history, or any indication that the well was ever endowed with any sacred importance. Although for an area to take on its name it must at the very least have been used in some manner. Thus the current Historical Environment Record (HER) records it somewhat sniffily as an Alleged Holy Well, pointing out that there is no evidence there of great antiquity and that the remains are certainly post medieval.

All this became somewhat academic however around 2011, when Cymdeithas Ffynhonnau Cymru wrote that they believed that the well had been buried. My visit, therefore, became an expedition to see whether or not this was the case; and, after spending an hour poking around in grass and nettles in the area indicated by the grid reference supplied, I concluded that this does appear to be true. The iron plate and the well below are lost to view.

There follow a couple of photographs showing where something used to be: 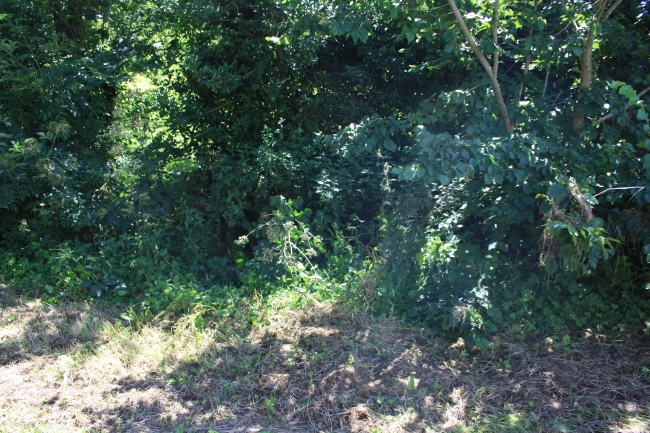 The location of the well was some 20 to 30 yards to the south of St Marys Church. A small whitewashed brick building dating from around 1830. This replaced a much earlier chapel, in a sequence that stretches back to at least 1570. Earlier buildings may have been closer to the well, reinforcing its significance.

In passing, it is worth recording that a second feature in the next field to the south, which has been variously indicated on maps since the 1870s as a well or a sluice, and which could previously be seen, surrounded by a small wooden fence, has suffered a similar fate and is no longer visible.