St Cawrdaf’s Well
The former parish of Abererch, now included within that of Llannor, extended to the north and west of Pwllheli. The church is dedicated to St Cawrdaf, and his holy well is to be found in a field some half mile to the north west of the church. Parts of the church building date from the fourteenth century, although as with many of the local churches it was substantially reconstructed in the nineteenth century

In the field of Welsh saints where nothing is particularly certain Cawrdaf’s history is murkier and more vague than most. He appears in early stories with links to King Arthur. He was probably a missionary to the area and a disciple of St Seriol, the church at Llangoed on Anglesey, close to Seriol’s monastery, is also dedicated to Cawrdaf

Bartrum mentions that his name appears on the list of “seven happy cousins” alongside Cybi, Beuno, Dewi and Seriol, which must surely be a good company to be in; although once again he points out that some sources omit Cawrdaf from the list including instead alternative happy cousins in his place.. His feast day is celebrated on December 5th.

The well is now enclosed in a small brick building, completely overgrown with brambles which made a close examination of the structure impossible. Myrddin Fardd records that the well was once reputed to cure all ills. The Royal Commission on Ancient and Historic Monuments reported in 1964 that the building stands on a surround of stone slabs which “may be ancient”. The stones do remain but could only just be glimpsed through the thorns.

The water still flows, however, demonstrated by the steady stream that emerges from the front of the structure flowing across the field before it.

There are two other noted wells in the parish, one supposedly dedicated to Cadarch, who some histories have suggested was Cawrdaf’s brother although others fail to associate in any way with the area; the other is Ffynnon Gwynedd, a well Fardd records to have been used in divination. I was unable to get access to either of these on this visit, but hopefully will have a chance to report on these in future. 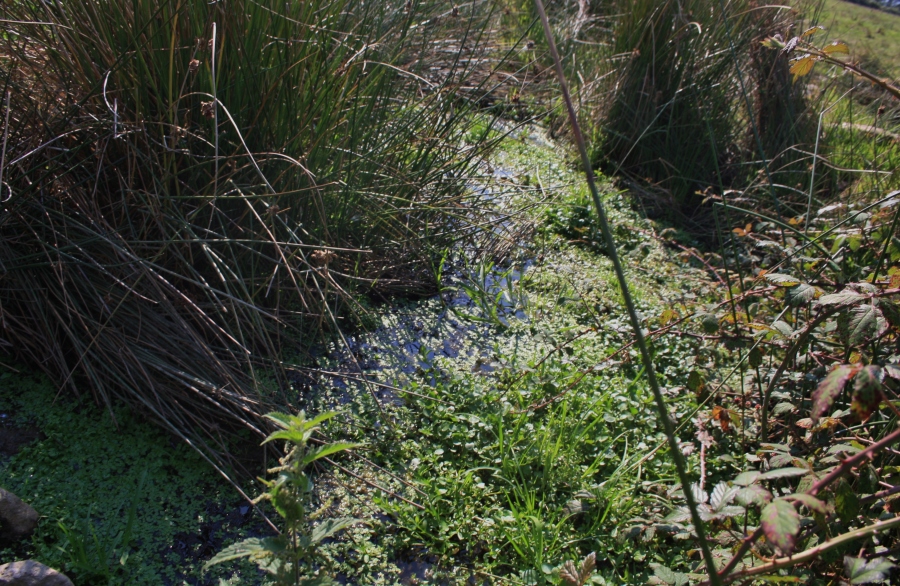