Llanengan lies towards the tip of the Llyn Peninsula, a mile or so from Abersoch  above the wide bay  Porth Neigwl commonly known as Hell’s Mouth. The church here is dedicated to Engan as is a nearby well.

Engan, the Lives of the British Saints informs us, Is more correctly  Einion, once a prince of the area and a brother of Saints Seriol and Merion. It was Einion who reputedly gave land and founded the monastery at Penmon on Anglesey where his brother Seriol took charge; and we are told it was Einion who gave the island of Bardsey to Cadfan to start the monastery there.

A fifteenth century poem celebrates Einion, the golden handed prince and his churches at Llanengan and at another unnamed location in Gwynedd. It was at Llanengan where he was buried and where his gilded, crowned effigy stood before the Reformation.

Leland, writing in the 1530s, records a great pilgrimage there in the very early sixteenth century. Many cures were obtained at his shrine, and the parish grew rich on the proceeds of offerings from pilgrims and cure seekers.

Interestingly, although the well is known in the early writings, and its water is used for baptism up into the beginning of the 20th century at least, , it is generally not the spring that  was resorted to for healing. Most cures were obtained at either Einion’s shrine, or at an indented stone said to bear the hoof print of his horse, Troed March Engan, in which water collected and which was claimed to have healing properties

Ffynnon Engan is located on private land around 50  yards to the west of the church. The site received grade 2 listed status in 1996. The listing description records it as a

It notes that it was restored and repaired around 1990. This layout is similar to a description made in 1910 by HR Roberts who describes a rectangular wall with seating and a convenient staircase, although the description recorded by the Royal Commission in 1964 suggests much less structure remains. The Royal Commission report notes conflict between successive maps pointing to two nearby wells. At one location they report “slight signs of masonry“. The Archwilio database also cites  a 1972 OS Reference and identifies two wells, Ffynnon Engan which is recorded as being more substantial than the 1964 record, and a second nearby unnamed well which they suggest was used when Ffynnon Engan ran dry. At the second spring they identify no sign of masonry or water and note that “there seems to be no ancient record of association with the saint“. One does get the feeling that the Inspectors were having an off day. This record is only partially supported by  the site listing on the Coflein database which  notes that the site is

The implication here is probably that during the first half of the 20th century the structure fell into a very poor state of repair leading to the state the  Royal Commission inspectors reported in 1964. It is certain that the restoration work carried out in the 1990s was extensive. The basin previously described in 1910 and hinted at in the Coflein record can clearly be seen today with stone seating  around the bath, and it is supported with dry stone walls on two sides to retain the earth bank into which it is set. It is a little unclear how much of this latter stone work is modern landscaping and how much  follows the original construction.

The owner, who was there at the time of the restoration mentioned that the stone steps into the well in the corner closest to the church, which are mentioned in the 1910 description, had been omitted at the time of the repairs, but which she would like to reinstate at some time. More recently the stream formed by the outflow from the spring, which forms a substantial flow away from the spring has been landscaped.. 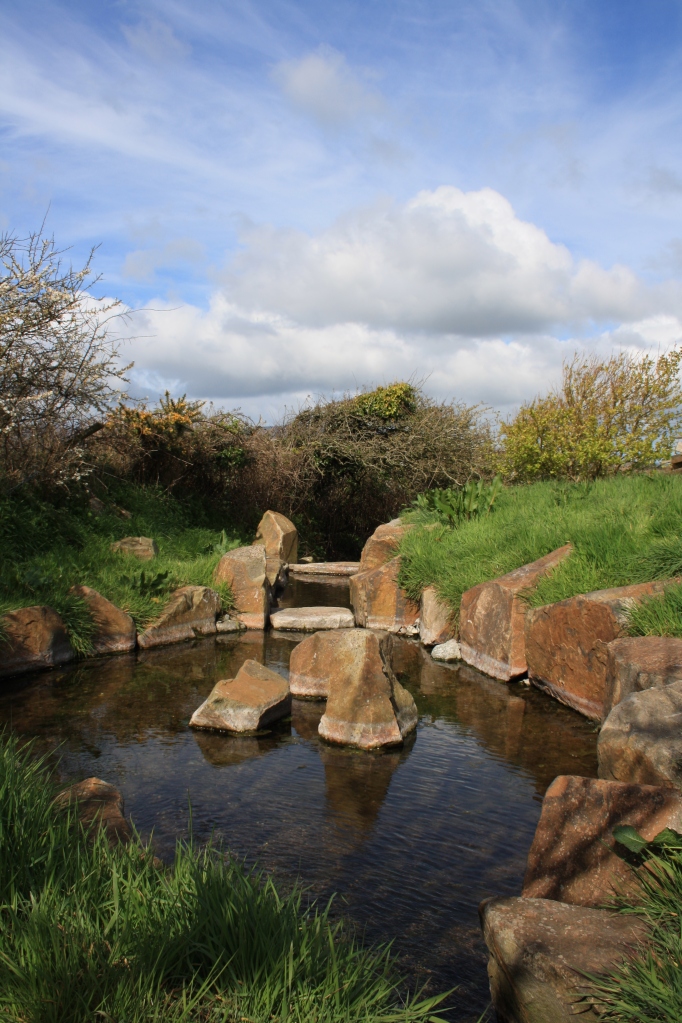 Einion’s feast day is given originally as February 9th but later appears to have moved to the 10th or 12th.

We are very grateful for the interest and help given to us by the land owner, despite being called on early on a Sunday morning.