The white lady is a ghostly form associated with a number of wells across Britain. She is not only associated with wells, she may be seen by streams and lakes, and also in lonely valleys, at crossroads, in churchyards or beside isolated roads.

Some authors have considered  that she might be some folk memory linked to the pre Christian belief of specific goddesses associated with water sources. The fact that such deities were venerated in Britain into the Roman period are well documented. Francis Jones chooses to suggest that the majority are a post Reformation confusion with St Mary to whom a vast number of wells were once dedicated..

Katherine Langrish suggests two distinct categories, the White Lady, or dynes mewn  gwyn, a true ghost, and the ladi wen an apparition associated with a location where someone has died a violent death..

The white lady, generally appears as a sorrowful creature, draped in white,  Langrish notes that while they can sometimes inspire terror the feeling most often associated with them is a tingle of eerie sadness. Although the majority of stories identify a woman in White Marie Trevelyan also catalogues grey, black and green ladies..

We find a number of examples across North Wales. One who appears to have attracted attention in recent years is the White lady of Rhyl who seems to be a regular visitor along the seafront. There is another White lady in nearby Dyserth, I Wonder if the two are really one and the same, although the Dyserth lady was associated with a roadside pool..

We find another  story at the Goblins Well outside Mold. Holland claims that the location had ‘an eerie reputation’ and people passing by would encounter a hooded headless lady in white..

Deborah’s well near Loggerheads is another location where recent press reports have reported a female phantom close to a well. In this case more dramatic since she appears with her hair on fire..

We find a mysterious lady by Ffynnon Fair near Aberdaron. In this case she is much more closely linked with St Mary, who was said to have visited the well, riding over the sea on a white horse. The particular well spirit here appeared to a girl to inform here how to use the power of the well to grant her wishes..

While the white ladies may generally be safe, although scared, we may also find a more malevolent water spirit. Beside  the pond, Pwll y Wrach near Flint Mountain there was one who supposedly foretold the death of a passing farmer when he disturbed her peace, a prediction that came true the following spring..

So while not necessarily related to holy wells, there are a number of well and spring related spirits. The literature on such ladies in north Wales seems a little more sparse than it is for South Wales and the rest of the U.K. So I would be pleased to receive any more White lady stories from this region.


This from Llantrisant, Glamorgan 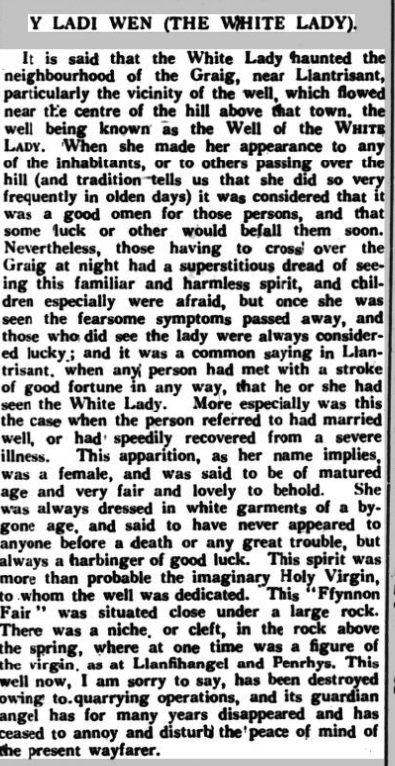